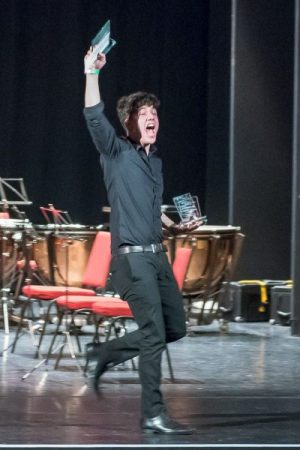 As there was no Entertainment Contest at Blackpool, we were sad that we wouldn’t be having our usual trip there this year! Don to the rescue though – he arranged our usual visit to St Chad’s hotel as part of our participation in the British Youth Open at Preston! So, we had our usual visit to Blackpool on the Saturday where we rehearsed and had some fun in the evening, then the next day we all piled on the coach and headed for Preston. We won this contest – our 7th year in succession! A great weekend was had by all.
Maybe the best comments came from 4 bars rest – here’s what they said about us :-

“Sunday afternoon also saw plenty of super playing from the six bands competing at the British Open Youth at the Guild contest, with adjudicator Helen Varley later telling 4BR that she and fellow adjudicator John Doyle felt the overall standard was excellent with the winner Youth Brass 2000, ‘stunning’.

“It really was,” she said. “There was so much good playing on show from everyone but Youth Brass 2000 was stunning, with amazing balance. We enjoyed every performance though and it was great to see the enjoyment for the music making. We could have asked them all to play again!”

It was the band’s sixth win in a row at the event and further underlined their dominance as the UKs leading youth bands under MD Chris Jeans, as they finished ahead of excellent shows from Oldham Music Centre and Poynton Youth”

The picture shows our euphonium player Jimmy rejoicing with the trophy!