Each year we are delighted to be able to perform a concert at The Cube Theatre, Corby for the Corby Rotary Club. This year was no exception, and on May 19th we performed to an almost full house at the theatre. We played a very varied selection of music, some of our old favourites, plus some quite new music which we had prepared for a contest earlier in the year. There were also a few numbers we had prepared especially for this concert. Some weeks after the concert, our chairman Don was summoned to the Rotary Club dinner, where he was astounded to be presented with a cheque for £1000! Don gave a short speech about how the band came to be formed, how it has moved on to be one of the premiere youth bands in the country, and how it manages to retain that position, given that any youth organisation always has a "fluid" membership, as youths don't stay youths for very long! We are completely blown away by the Rotary Club's generosity, and our heartfelt thanks go out to them. 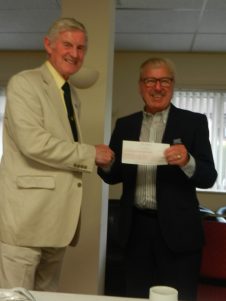