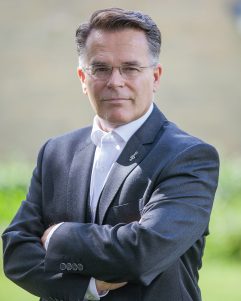 Belfast-born Stephen Bell has built a hugely diverse career in both commerce and music in and around Northamptonshire spanning over 35 years. Stephen's association with Brass Bands stretches back to his time at Laganvale Brass Band, directed by Alan Murdock in Northern Ireland, firstly on Eb Bass and then (because he was too small!) on Timpani. Although it was Alan Murdock that introduced Stephen to conducting (at the age of 14) it was studying music at Southampton University and subsequently M.Mus (performance) at the University of Surrey that set Stephen on course to seriously develop as a conductor and musical director in a variety of genres, encouraged and championed by the composer Mike Sheppard and Professor Peter Evans.

Stephen was appointed as the Musical Director of the Northampton Concert Band (2005-2015) following in the footsteps of Harold Colman and has enjoyed considerable success with the band at the NCBF festival finals, winning numerous Gold and Platinum awards. Stephen was appointed Musical Director of the St Cecilia Singers of Rushden (2007-2012) a tenure culminating in a memorable performance of Brahms German Requiem with the international soloist David Wilson-Johnson as the solo Baritone in November 2012.

Stephen returned to the world of Brass Bands to be appointed musical director of the Rushden Windmill Brass Band (2012-14) the award winning Northampton Male Voice Choir (2011-current), Market Harborough Orchestra (2012-current) and occasional concerts with the famous all-ladies “Boobs and Brass” and of course the mighty GUS where he was appointed Associate Musical Director in 2021 working alongside Chris Jeans. Stephen was introduced by Chris to the magnificent young talent in Youth Brass 2000 where he stood in for Chris at the last minute for the 2022 Italy tour. Stephen was subsequently thrilled to be appointed Resident Musical Director for Youth Brass 2000 in Sept 2022 following in the footsteps of Gary Fountain.

Stephen is in demand as an adjudicator and has enjoyed working with the Milton Keynes, Wellingborough (and the recently formed North Northampton) Festival.

Whilst not making music Stephen has cultivated an impressive parallel career within the automotive industry. Stephen held a very senior position within Mercedes-Benz in Milton Keynes for 10 years (2004-2014) and since 2014 has set up and run his own training company Red Kite Training & Development Limited providing consultancy and training services mainly for the Passenger Car, Commercial Vehicle and Truck network for Mercedes-Benz and other automotive clients.

Stephen has two daughters Rebecca and Hannah both of whom are professional violinists.

When not making music or running his business Stephen can be found training for 5K, 10K, Half Marathon’s and most recently the 2021 London Marathon raising over £8000 for Prostate Cancer. Stephen hopes to run the Belfast Marathon in 2023 (41 years after running the first ever Belfast Marathon in 1982) to mark his 60th birthday year.