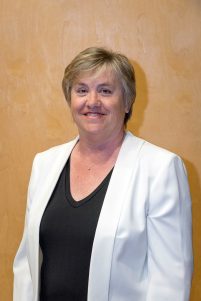 After 8 glorious years as Resident Musical Director of Youth Brass 2000, Cathy Fountain has finally decided to ‘hang up the baton’. Cathy was an integral part of the musical team at the multi-award winning band – alongside the incomparable Chris Jeans – and was instrumental in helping deliver the most successful period in the band’s history.

Whilst Chris would usually take the lead in many contests, in the weeks and sometimes months leading up to the big day, Cathy would be inevitably be there, shaping the performances, leading sectionals and sharing the load with Chris. On the band’s annual European tours, Cathy helped deliver crowd-pleasing, toe-tapping sets, on many occasions leading to the large local audiences dancing and cheering along. Cathy’s compering skills at concerts were legendary, often involving bemused members of the band being ‘interviewed’ in front of the audience, breaking the ice and creating a buzz, sometimes unintentionally!

Cathy’s final time leading the band was a successful one, scooping the 2020 Butlin’s Youth title fending off strong competition from 3BA band from Germany. Chris Jeans, Artistic Director of the band for over 32 years commented: “It’s always hard to say goodbye to those who are so close to us all at Youth Brass 2000. Words cannot express sorrow as we bid farewell to our Resident Musical Director, Cathy Fountain. Well, what can I say other than 8 years has flown by so quickly? Cathy, you have inspired and encouraged so many young musicians in the band. The band has had so much success under your guidance over the years both on the concert and competition front. We have shared the podium on so many wonderful tours in Italy, Spain and Austria. Goodbyes make you think, they make you realise what you’ve had, what you have lost, and what you have taken for granted. You’ll be truly missed by everyone at YB2K. Best wishes for the new chapter in your life.”

Don Collins, Youth Brass 2000’s indefatigable Chairman said: “A wonderful, gentle lady who has devoted 8 years of brilliant service to Youth Brass 2000. Cathy will be hugely missed by us all and we genuinely hope it’s not the last we see of her.” Everyone at Youth Brass 2000 wishes Cathy well for her retirement and is extremely grateful for her commitment to the band and the fun and laughter had along the way.